Many parents dream of one day watching their child play professional sports.  They envision their baby playing alongside a legend someday, perhaps someone like Derek Jeter.  For most, it’s a futuristic fantasy, extremely improbable, and unlikely.  However, thanks to Steiner Sports, it could potentially happen before they turn fourteen! 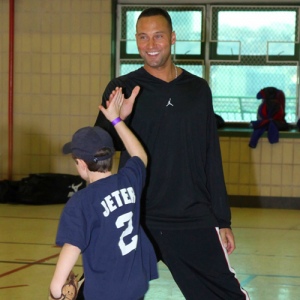 On Sunday, January 9, 2011, children ranging in age from 7-14 will have the unique opportunity to take part in the 2011 Derek Jeter Kids Clinic, presented by Steiner Sports.  While Jeter will chase his 6th World Series Title this season, he will take time in early January to work one-on-one with a hundred lucky children in New York City.

Kids will rotate between five individual stations, working on hitting, fielding, pitching and base running. Joining Jeter at this once-in-a-lifetime event will be teammate, and Yankees Centerfielder, Curtis Granderson.  This dynamic duo will also participate in an exclusive question and answer session following the clinic.

Parents will be on hand to experience the day alongside their little sluggers.  They are encouraged to snap hundreds of photos and bring camcorders to capture the day’s events.  In addition, children will leave with a Yankees gift pack including autographed items from the players in attendance.

Throughout his legendary career, Derek Jeter has played alongside names like Rivera, Posada, Bernie, Tino, and O’Neill.  Here’s an opportunity for a select group of young ball players to add their name to that celebrated list.