In the first postseason start of his already remarkable career, Roy Halladay threw the second no-hitter in October baseball history.  Larsen turned the trick back on October 8, 1956 during Game 5 of the World Series. 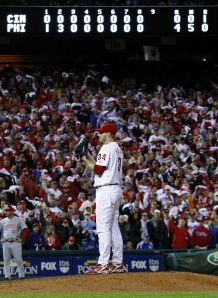 In 2010, a Jay Bruce walk with two outs in the fifth inning was the only blemish for “Doc” Halladay as the Philadelphia Phillies defeated the Cincinnati Reds 4-0 in Game 1 of their National League Division Series.  Halladay was masterful throughout, mixing his fastball and breaking ball in dominating fashion.

With the no-no, Halladay joined another exclusive club, becoming just the fifth player in Major League Baseball history to throw two no-hitters in the same season.  Back on May 29, 2010, Halladay threw the 20th Perfect Game in baseball history, defeating the Florida Marlins 1-0 in Miami.

This past off-season, when the Phillies parted ways with a proven postseason ace, Cliff Lee, in favor of Halladay, an October novice, many questioned the move.  With his Game 1 performance, Halladay validated his place atop the Phillies rotation, and proved he can handle the bright lights of October.