How are the New York Yankees going to eat this Texas-sized elephant that stands before them?  If the Bronx Bombers are going to capture their second consecutive Title, and twenty-eighth in franchise history, they’ll have to do it one bite at a time. 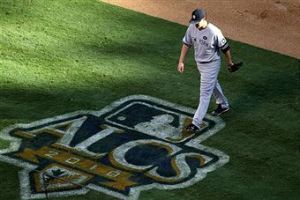 The Yanks Look to Hughes To Extend the ALCS Tonight.

The mission statement consistently reads: World Series Championship or bust, but this is no time to think about a confetti-littered Canyon of Heroes.  Instead, the Yankees must rally around a more immediate goal, winning tonight’s ALCS Game 6.

Nothing more, nothing less.

After falling behind the Rangers 3-1 in the series, Manger, Joe Girardi addressed his squad, urging them to believe in the old cliché of “one game at a time.”  He reminded his pinstriped audience that they had won multiple games in a row many times before, but that it always started with a single victory.

With that said, the Yankees pulled themselves up off the canvas on Wednesday afternoon, wobbled towards the center of the ring, and threw a series of haymakers at the suddenly mighty Texas Rangers, winning the game 7-2, and sending the series back to Texas.

Their first bite of the elephant went down smoothly.

As the Yankees prepare to chew on another piece tonight, it’s important they ignore the man waiting in the room reserved for Saturday night, Cliff Lee, an elephant unto himself.  However, Game 7 doesn’t happen without a victory in Game 6, a task the Yankees are well equipped to complete with Phil Hughes pitching on regular rest, and a suddenly rejuvenated line up.  Standing in their way tonight is Game 2’s winner, Colby Lewis, backed by a hungry and formidable Rangers line up.

There’s no doubt, the task is a daunting one, but the Yankees would not have boarded a plane to Arlington, TX if they didn’t believe it was one they could accomplish.  They stand just six wins away from their 28th World Series Championship, including one with the seemingly unbeatable Lee.

It all starts, and potentially ends, with tonight’s Game 6, the next bite of the elephant on their plate.