Click each individual thumbnail below to read the advertising copy, exactly as it appeared in Dallas Cowboys STAR Magazine: 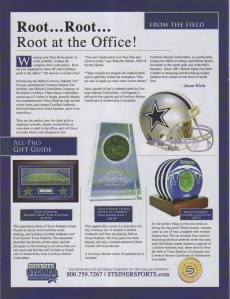 Click each individual thumbnail below to read the advertising copy, exactly as it appeared in Dallas Cowboys STAR Magazine:

“Life moves pretty fast.  If you don’t stop and look around once in a while, you could miss it.”

Those words, once spoken by Matthew Broderick in the 1986 hit “Ferris Bueller,” couldn’t be more apropos when thinking back on 2009 at Steiner Sports.  It was a year that had Steiner Sports employees’ heads spinning with activity and customers’ heads turning with curiosity and intrigue.  Though it flew by, it was a challenging, yet rewarding campaign, filled with moments and achievements that revolutionized the sports collectibles industry…again.

The final year of the “double zeros,” the “oughts,” or however one chooses to refer back to this decade, saw Steiner Sports prosper through three defining moments in company history, events that changed the way the company functions, and further developed the way sports fans collect memorabilia.

In recent years, Steiner Sports has developed relationships, and partnerships with some of the most successful organizations in professional and collegiate sports.  The company currently provides exclusive access to game used collectibles from the New York Yankees, Boston Red Sox, Dallas Cowboys, and Notre Dame, Alabama, North Carolina, and Syracuse Universities.  The growing roster of partners, presented a growing inventory for a growing company occupying, what seemed like, a shrinking warehouse.

In an effort to satisfy the company’s need for more space, Steiner Sports moved into new digs in March.  Just like their pinstriped partners in the Bronx, the company shifted across the street into a new venue, better equipped to handle their needs in an ever-changing marketplace.  The move has been a positive one for all parties involved.  The state-of-the-art facility has allowed the company to function more efficiently, better serving loyal customers – many of whom made the pilgrimage over the last nine months to check out the new place.

In 2009, Steiner Sports urged all Yankees fans and baseball historians to “Take a Seat in History.”  In May of 2009, the company announced plans to offer authentic seats, and other stadium artifacts including sod,monument park bricks, and foul pole pieces, from the original Yankee Stadium.  A flurry of activity ensued.  Eager fans were able to gobble up pieces of the historic stadium, scooping up whatever relics became available.  Owning an actual piece of Baseball’s Cathedral was an opportunity that few fans passed up on.

In addition, Original Yankee Stadium memorabilia was on display throughout the Inaugural Season inside the Great Hall, courtesy of Steiner Sports.  The Yankees-Steiner Collectibles Store flourished inside the Stadium too, giving fans insider access on game days.  Throughout the season, Steiner Sports employees were on hand to meet fans, and explain the unique line of items pulled from the “House That Ruth Built.”

What an unbelievable season it was too!  The Yankees broke in their new quarters in grand fashion!  The Greatest Closer of All-Time, Mariano Rivera, converted his 500th career save in June, and The Captain, Derek Jeter, passed Lou Gehrig on the all-time Yankees hits list in September.  Both historic moments served as appetizers for October’s (and November’s) main course…

The instant Mark Teixeira squeezed the final out of the 2009 World Series, the Yankees hard work towards a 27th Championship was over.  However, the work within the Steiner Sports office was just beginning.  Commemorative collages, plaques and crystals had already been prepared weeks in advance, but the quest towards a team signed project was quickly underway.

Over the course of about three weeks in November, twenty-nine members of the World Champions made their way through the Steiner Sports office, signing everything from team signed baseballs and photos, to game usedproduct from the 2009 season.  Once again, Steiner Sports had the most complete and intriguing collection of commemorative memorabilia to offer customers, featuring an unprecedented collection of superstars – perfect timing for the upcoming holiday season.

While 2009 was a legendary year in the history of Steiner Sports, the future is bright for the innovative leader in sports collectibles and gifts.  There are many exciting announcements on the table for 2010, events that will fire up customers, and further transform the collectibles industry.  2009 was fast.  2010 will move just as quick.  Just be sure to stop and look around.  Big things are coming so pay attention!  Bueller?

Connect.  That’s what I do every day I’m in the Steiner Sports offices.  I connect sports fans with their heroes…customers with memorabilia…legendary sports moments with new product ideas.  I help passionate people realize their sports fantasies by getting them closer to the game than they thought possible.

One might say I’m a glorified middleman.  That’s one way to put it.  One thing’s certain, I’m always in the middle of something exciting, thanks to the relationships Steiner Sports has with some of the most elite athletes and franchises in professional and collegiate sports.

For years, I’ve enjoyed connecting with many of you over the phone, via e-mail, and in many instances, meeting face-to-face at some of our unforgettable meet-and-greet events.  This blog is an opportunity for me to further advance that relationship, giving you exclusive insight into happenings within the Steiner Sports community, and providing my take on sports news as it breaks.

Many of you have asked me what it’s like working directly with athletes like Derek Jeter, Dustin Pedroia, and Eli Manning or partnering with teams like the Yankees,Red Sox, and Cowboys.   I’m constantly asked: What innovative new items are coming out?  Who’s signing next?  Or, simply, what did you think of the game last night?  At Steiner Sports, there is always something going on…I look forward to sharing some of it with you along the way.  Get connected.