Bernie Williams stood there and faced the media with those three words quietly displayed on his t-shirt.  It was October of 1996, and Williams wore this motivational garb in front of his locker throughout the post season.  This subtle reminder personified the Yankees of the mid-90s. 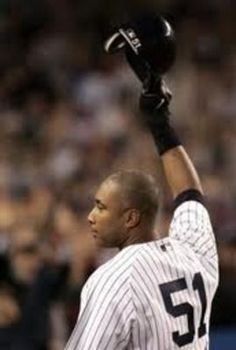 Williams will have his #51 retired tonight.

Those Yankees teams never gloated, always acted as if they had “been there before,” and proceeded to win four World Series titles in five years.  When I spoke with Bernie Williams, a few years back, he reflected on his time in pinstripes. All these years later, he still maintained a humble opinion of his years in the Bronx.

“I played on some unbelievable teams, but I was never concerned about where we ranked all-time or anything like that,” he said.  “I was just glad to be there and be a part of all the winning.”

Williams, who officially retired earlier this year, will have his #51 follow suit tonight at Yankee Stadium. The switch-hitting legend will take his rightful place among Yankee immortals during a pre-game ceremony – A fitting tribute for a humble man who enjoyed a special career.

“As I’ve grown older, I’ve learned to appreciate all the precious moments I had,” he told me.  “I was part of a truly great team and I enjoy sitting back and enjoying those moments.”

Williams played on some of the most successful Yankees teams of all-time, and the center fielder had a major role in most of those triumphs. Over the course of his 16-year career – all with the Yankees – Bernie Williams was selected to 5 All-Star Games, won the 1996 ALCS MVP Award, won 4 Gold Gloves for his wizardry in center field, and captured the 1998 Batting Title.  Despite all his personal accolades along the way, Williams insisted his greatest memories are team oriented.

“The batting title in 1998 was special, but that whole 1998 team was unbelievable,” he said.  “Those are the things I remember the most…the things we accomplished as a team.”

It is that unassuming personality that has landed Bernie a special place in the hearts of most Yankees fans.  Adulation that was never more evident to Williams than at the final game ever played at the original Yankee Stadium. 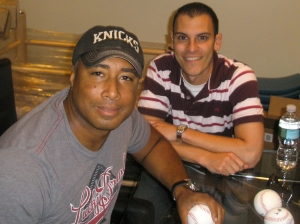 “It was awesome to see the fans embrace me the way they did,” he said.  “Especially after being out of the game for a few years.  I was so surprised I got introduced after Yogi!”

Williams was invited back the following April to help open the new home of the Yankees.  He appeared in center field, playing “Take me out to the ball game” on his guitar, and highlighted an extraordinary day at the new ballpark.

“Playing [the guitar] in center field on Opening Day was weird,” he said.  “It was such a bizarre moment.  I was in Yankee Stadium, with a guitar, playing in front of a full house.  It was such a cool moment.  There was so much electricity that day.  It reminded me of the old Stadium a lot.”

Inside that old Stadium, Bernie Williams cemented his place in Yankees lore, quietly positioning himself in the record books alongside other Yankees center fielders like Mickey Mantle and Joe DiMaggio. Tonight, he’ll join them in Monument Park as well.

He shut up and just played.

1 thought on “Bernie Williams Did Things His Way, Quietly.”