The Yankees drew a Wild Card.

They can turn their mediocre hand into something special. 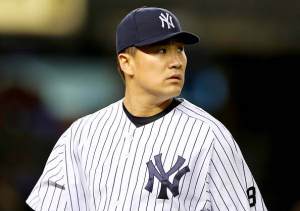 Tanaka Time in the Bronx Tonight vs. the Astros.

The Postseason offers a clean slate for all. Just like in poker, the Yankees can be anything they want to be as a Wild Card.

Ordinary baseball teams can be Kings.

Sure, the Yanks looked lifeless as they stumbled towards Tuesday night’s one-game playoff at Yankee Stadium. Losers of six of their last seven games, the Yanks weren’t hitting, looked tired, and appeared destined for a quicker hook than Joe Philbin got in Miami.

None of that matters now, though. That’s old news.

They made it to October as a Wild Card. They’ve got a seat at the table – just like those 2000 Yankees, who also sputtered through September and won 87 games. Those guys turned a Wild Card berth into a Championship.

Today’s team shows their hand tonight. It starts with an ace, Masahiro Tanaka. He’ll take the ball in this sudden-death matchup with the Houston Astros – the exact type of game the Yankees envisioned him pitching when they invested $175 million in him prior to the 2014 season.

It’s his biggest moment as a Yankee. It’s the most important game the franchise has had in two years. It’s the type of event that could propel them towards a 28th title.

October is different. The Yankees organization knows that better than anyone.

Ante up, Yanks! Push those chips to the center of the table.

Tonight, as a Wild Card, they can be anything they want to be.

1 thought on “Wild Card Yanks Can Be Anything They Want”