After a magical 2009 season, his first in pinstripes, his 2010 season ended abruptly, without any champagne to drink.  He suffered a season-ending hamstring injury running out a ground ball during Game 4 of the ALCS, and the New York Yankees eventually lost to the Texas Rangers in 6 games. 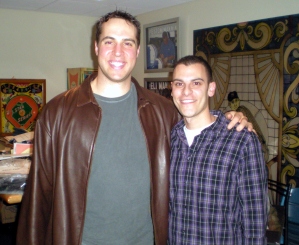 With Teixeira After Our Interview

This week,Teixeira walked into the Steiner Sports Corporate Offices, seemingly pain free and without any limp, ready to move forward and focus on the upcoming 2011 season.  After signing a new collection of items for the Steiner Sports inventory,Teixeira discussed a number of interesting topics including Cliff Lee’s potential future in pinstripes, Derek Jeter’s importance to the Yankees, and his thirst for another World Series championship.

Jason Klein: How has this off season been different so far, compared to 2009, coming off a championship?

Mark Teixeira: It’s been a little disappointing, you know?  When you win a World Series, every single year, that’s what you want to accomplish again.  This year we came up a little short and so this off-season is all about getting back to the World Series next year.

JK: In your first season with the Yankees, you won a World Series title.  How did the experience compare to what you expected?

MT: It was everything and more.  Being a Yankee, winning the World Series in the first year of the new stadium, my first year as a Yankee, it couldn’t get much better than that.  It was just an incredible place to be last year and hopefully these next couple of years we’ll have a few more rings.

MT: My sales pitch is that it’s the greatest place to play in the world.  The stadium, the city, putting on those pinstripes every day is magical.  I think every baseball player should be able to put on the pinstripes for just one day.  I get to do it, you know, 162 games a year, so if I was a free agent coming to New York right now, it would be such an easy, easy decision.

MT: It works both ways, you know?  You want to compete against the best and you want to beat the best, but unfortunately if you lose against them, you’d rather have them on your team.

JK: You’ve only been teammates for 2 years now, but what does a guy like Derek Jeter mean inside your locker room?

MT: Derek Jeter is such a great person for our clubhouse.  He’s been there, he’s been a part of 5 Championships, he’s our captain.  Any time there’s a question, or something that needs to be addressed, Derek’s the guy to do it and he’s been doing it for years.