Click each individual thumbnail below to read the feature story, exactly as it appeared in New York Yankee Legacy Magazine: 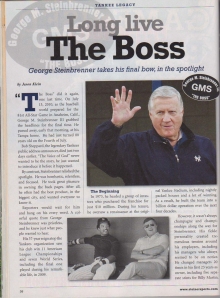 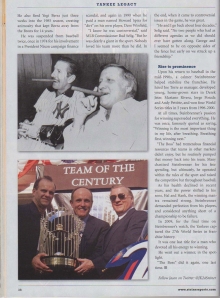 “The Boss” did it again, one last time.

As the baseball world prepares for tonight’s 81st All-Star Game in Anaheim, George M. Steinbrenner III grabbed the headlines for the final time.  He passed away, early this morning, at his Tampa home.  He had just turned 80 years-old on the fourth of July. 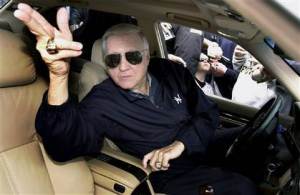 Bob Sheppard, the legendary Yankees Public Address Announcer, died this past Sunday.  “The Voice of God” never wanted to be the story, he just wanted to introduce it before it happened.

By contrast, Steinbrenner relished the spotlight.  He was bombastic, relentless, and focused.  He took great pleasure in owning the back pages.  After all, he often had the best product, in the biggest city, and wanted everyone to know it.

Reporters would wait for him and hang on his every word.  A colorful quote from George Steinbrenner was priceless, and he knew just what people wanted to hear.

His 37-year reign atop the Yankees organization saw his club win 11 American League Championships and 7 World Series, including the final one played during his remarkable life, this past season.  In 1973, he headed a group of investors who purchased the franchise for just $10 million.  He proceeded to build the team into a billion dollar operation over the next four decades.

It wasn’t always champagne and championship rings along the way for Steinbrenner.  His fickle personality created tremendous tension around his employees, including his managers who always seemed to be on notice.  He changed managers 20 times in his first 23 years as owner, including five separate stints for Billy Martin.  He also fired Yogi Berra just three weeks into the 1985 season, creating animosity that kept Berra away from the Bronx for 14 years.

He was suspended from baseball twice, once in 1974 for his involvement in a President Nixon campaign finance scandal, and again in 1990 when he paid a man named Howard Spira for “dirt” on his own player, Dave Winfield.

Upon his return to baseball in the mid-nineties, a calmer Steinbrenner helped stabilize the franchise.  He hired Joe Torre as manager, developed young, home-grown stars in Derek Jeter, Mariano Rivera, Jorge Posada and Andy Pettitte, and won 4 World Series titles in 5 years from 1996-2000.

At all times, Steinbrenner’s passion for winning superseded everything.  He was once, famously quoted as saying, “Winning is the most important thing in my life, after breathing.  Breathing first, winning next.”

“The Boss” had tremendous financial resources that teams in other markets didn’t enjoy, but he routinely pumped that money back into his team.  Many chastised Steinbrenner for his free spending, but ultimately, he operated within the rules of the sport and raised the competitive bar throughout baseball.

As his health declined in recent years, and the power shifted to his sons, Hal and Hank, the winning mantra remained strong.  Steinbrenner demanded perfection from his players, and considered anything short of a championship to be failure.  In 2009, for the final time on Steinbrenner’s watch, the Yankees captured the 27th World Series in franchise history.

It was one last Title for a man who devoted all his energy to winning.

He went out a winner.

“The Boss” did it again, one last time.