My iPhone wouldn’t turn on.

It wouldn’t charge, connect to a network, or receive a call.  A spilled glass of water was the culprit, but all fingers were pointed squarely at me.  I was the one who accidently left my device next to cell phone kryptonite.

I was frustrated, annoyed, and upset with myself for the gaffe.

I felt isolated from the world.  All alone.

No one could get through to me.

In a panic, I put life on hold, and headed to the Apple Store to try and restore my method of communication.

Ironically, while there, I ran into a man who once heard me loud and clear.

It was 1996.  I was a sophomore at Yorktown High School in Westchester, NY, and had serious concerns about what direction I wanted to take my life.  Looking back, I guess I was no different than any other sixteen year-old.  For some reason, though, figuring out my career path was very important to me at an early age.  At times, it consumed me.

Professionally, I just wanted to know where I’d fit in.  My indecisiveness often left me feeling isolated from the world.  All alone.

Everyone had advice, but nothing seemed to fit.

No one could get through to me. 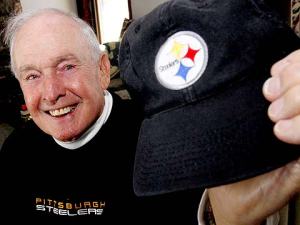 He was my high school guidance counselor and I craved guidance.  We had talked several times in the past – mostly about football, and his father, the first head coach in Pittsburgh Steelers history – but this time we huddled up to discuss my future.  With encouragement and compassion, Douds analyzed my situation.

Our broad, and lengthy talk concluded with a single, focused plan of attack.  We decided I should make a career out of my two passions (sports and writing) and that somehow, I would have to meet a former student of his, Rick Cerrone.

Cerrone, also a Yorktown High School graduate, had once engaged in a similar conversation with Douds.  Combining his own love of sports and writing, Cerrone went on to become the Director of Media Relations and Publicity for the New York Yankees – a role he held from 1996-2006, spanning 6 World Series appearances and 4 championships.

Back then, Cerrone’s schedule was tighter than a Yankees-Red Sox Pennant Race.  An actual meeting with him, as Douds had suggested, would be difficult to swing.

Getting together with him seemed unimportant at the time though.  Just hearing that a local kid had made it in professional sports was enough motivation for me.  Yet, just a few hours after Douds told me his story, Cerrone randomly showed up at Yorktown High School.  Unannounced and unbeknownst to Douds, he happened to be in the area and decided to visit the man who had once helped him find his own way.

Fate?  Coincidence?  Didn’t matter.  I had my meeting.

I was fortunate enough to spend some time chatting with Cerrone about his career path, and quickly developed a nice relationship.  Through the years, I would periodically pop into the Press Box at Yankee Stadium to meet up with him during games.  I made a habit of checking in from time-to-time, to update him on my career, or give him a quick call to say hello.

Something I couldn’t do without a phone, though.

Several hours had passed now, and I still couldn’t power up my device.  Some Genius at the Apple Store informed me that the phone was beyond repair, and I’d have to invest in a new one.  The revelation left me even more frustrated, and for the moment, still isolated.  In need of a quick pick-me-up, I decided to take a walk before committing to the unexpected purchase.

I hadn’t seen him since graduating in 1998, and there he stood, inside Lids, chatting with the kid at the register about his father’s 1933 stint with the Steelers.  It was surreal.

I approached him from behind and patiently waited for a break in his conversation to jump in.  The Lids employee noticed me hovering and asked if I had a question.  I replied, “Not for you…but for him.”

I pointed at Douds.

His eyes opened wider than a 300-pound lineman.

What ensued was a true testament to just how dedicated Douds was, and still is, to all of his students.  Though fifteen years had passed, it may as well have been fifteen minutes.  To my surprise, he remembered everything about me.  He jumped right into conversation, asked how my writing career was going, wanted to hear how my parents were doing, and even referenced our fateful meeting with Cerrone.

“I tell that story all the time,” he gushed.

Throughout our talk, Douds showered me with praise and recounted fond memories he had of me as a student.

We talked a little football too, naturally.  Now a high school football coach, Douds glowingly spoke about his current roster.  He loved his players, and loved life.  His passion was infectious.   For the moment, I realized just how insignificant my dead phone really was.

Douds got through to me again.

Despite my technological limitations, we exchanged contact info – the old-fashioned way, with a pen and paper – and wished each other continued luck and success moving forward.

Before heading back to the Apple Store, I asked that he stay in touch with me.

With a new iPhone in my pocket, he’d have no trouble getting through to me.