Everyone got their swings in.  For three months, Mark Sanchez was repeatedly beaten like a piñata.  After developmentally taking a step back in 2011, Sanchez was strung up and hung from a tree, allowing anyone with an opinion to take their cuts.

No one was able to break him open, but we still found out what’s inside. 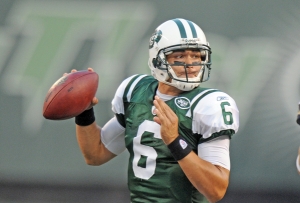 Despite taking more hits in the press than he did on the field, Sanchez remained strong and dignified.  He withstood the verbal thrashing, refused to get into a war of words, and respectfully allowed things to play out.

He weathered the storm – mostly hot air blown by Santanio Holmes and a handful of unnamed teammates – and survived the Peyton Manning rumors.  He remained quiet for three months, then loudly resurfaced last night.

That’s when the New York Jets left little doubt about where their loyalties rest.  They made Sanchez one of the highest-paid players at his position with a three-year contract extension that included $40.5 million in “new money,” according to ESPN.

Sanchez took the opportunity to respectfully break his silence, and reiterate his dedication to the organization that drafted him in 2009.

“I’m going to be their starting quarterback for the next few years here and that’s exciting,” he said.  “I’m the leader of this team and I’m excited to get back.”

Surely, this was the perfect opportunity for Sanchez to take a few swings of his own at those skeptical unnamed players…right?  Wrong.  As he usually does, Sanchez took the high road.

“If you’re an unnamed source, you don’t speak for yourself and therefore you don’t really speak for the team,” he said.  “So, I didn’t really pay any mind.”

Neither did Jets brass.

There was no panic in Florham Park.  Even after it became apparent that Peyton was not their “Mann,” the Jets felt confident enough in Sanchez to make a statement, and lock him up.

How did Eli do in his fourth season?  Check his ring finger.

Can Sanchez make the same progression? There will still be critics.  Many will claim this new deal is a PR stunt, another attempt to coddle the young quarterback, or an apology for letting him twist in the wind during the Manning sweepstakes.  All valid questions.  Sanchez won’t pay any attention to them, though.

When you play quarterback in New York, everyone wants to take their cuts, and try to knock you down.

They won’t break him open though.

There’s no need to.  We already know what’s inside.