This weekend’s NFL Draft was more awkward than Prince William and Kate’s Royal Kiss.  Both were public spectacles with millions of viewers, and both just seemed a little weird.

With the ugly Lockout serving as a backdrop, all eyes were on New York City as the NFL kicked off its 2011 Draft on Thursday night at Radio City Music Hall.  Traditionally a positive celebration of the league’s bright future, this year’s Draft was marred by greed and uncertainty. 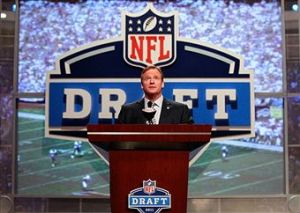 When negotiations failed to reach a new collective bargaining agreement in mid-March, the NFL owners locked out its players, effectively ceasing operation of the nation’s most popular sport.  Since that point, owners and players have not been allowed to communicate with each other, negotiate contracts, sign free agents, execute trades, or prepare for the upcoming season in any capacity.  Players who showed up to team facilities have been turned away by security.

Yet, strangely enough, the show went on as scheduled Thursday at Radio City…sort of.  As expected, NFL Commissioner, Roger Goodell stepped to the podium to announce that the Carolina Panthers, owners of the first overall selection, were “on the clock.”  Typically greeted with cheers, frustrated fans instead booed and bombarded him with “we want football” chants.  He acknowledged the crowd’s pleas with a Tweet:

“I agree with the fans here at Radio City,” he posted on Twitter Thursday night.  “We want football.  I’m with you, I get it.”

Does he, though?  Football fans can only hope so.  The longer the NFL is doing battle in the courtroom instead of on the gridiron, the greater the possibility that the upcoming 2011 season could be in jeopardy – a disaster the owners and players should seek to avoid at all costs.

That grim possibility seemed to be ignored at the draft.  Commissioner Goodell was all smiles – though it seemed like he was just going through the motions – as he ceremoniously welcomed each collegiate prospect into the same player’s union he is currently battling in court.  Very odd.

Welcome to the NFL!  Now you’re locked out!  Go home!

Should the owners and players come to an agreement in time to salvage the 2011 season in its entirety, fans will forgive and forget.  However, if this dispute lingers through the summer, cancelling games, the NFL could start to lose its loyal fan base.

Under the circumstances, it might seem awkward, but it’s time to kiss and make up.