For sixteen seasons, he dramatically stared down opposing batters and came up big in the biggest of spots.  More times than not, Pettitte delivered, earning the trust of his teammates and his fans alike.  Tomorrow afternoon, Pettitte will stare down a throng of media at Yankee Stadium to announce his retirement.  When he does, trust him when he says, he’s thrown his final pitch in baseball.

Pettitte will not pull a “Brett Favre” and un-retire.  He gave the game of baseball, and the New York Yankees specifically, everything he had.  Joe Namath once said, “If you aren’t going all the way, why go at all?”  Pettitte, a workhorse, and a perfectionist on the mound, must have asked himself this very question.  Most likely, the answer wasn’t up to his standard of excellence and he decided to move on rather than perform at a level below what he expects. 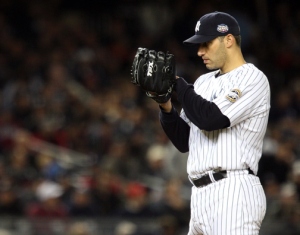 Pettitte’s Reliability Will Be Tough To Replace.

So Andy Pettitte will call it a career.  One of the most beloved and reliable players in Yankees history, he will retire a 3-Time All-Star and a 5-Time World Series Champion.  He is the all-time leader in Postseason victories (19), finishes with a 240-138 career regular season mark, and a 3.88 ERA.

Along with teammates Derek Jeter, Jorge Posada, and Mariano Rivera, Pettitte helped make up the “Core 4” of longest-tenured Yankees, despite playing three seasons in the middle of his career for the Houston Astros.

Perhaps his most memorable moment in pinstripes came during his second season in baseball.  It was Game 5 of the 1996 World Series, and the Yankees and Braves were tied at 2 games each.  The Yankees called on their young lefty to win a pivotal game in Atlanta, squaring off with John Smoltz.  Pettitte threw 8.1 innings allowing 0 runs on just 5 hits.  That night, his reputation as a big-game pitcher would be born.

Over the next 14 years, Pettitte would appear in 7 more World Series (once with Houston in 2005) and would consistently answer the bell when called upon.  Whenever the Yankees were in need of a big win after a Game 1 series loss, Pettitte could be trusted with the ball.

In 2007, Andy Pettitte confronted the allegations of his HGH use with the same class he displayed throughout his tenure in the big leagues.  His admission to wrongdoing restored faith among fans and his sincerity allowed him to turn a dark page that other offenders never could.

With his retirement, Pettitte will most likely settle back down in Texas, with his family, and leave behind a legion of adoring fans and a suspect pitching rotation in the Bronx.  The 38-year-old Yankees legend will depart as an iconic figure in franchise history and a fan-favorite.

Tomorrow, when Andy Pettitte tells the world he’s retiring, trust him.  He will not be making any comebacks, not if he doesn’t believe he can pitch at the level he expects.  While his final statistics place him in the Hall of Fame discussion, there is no guarantee he will ever find himself enshrined in Cooperstown.

Monument Park is a different story.  Andy Pettitte Day at Yankee Stadium will happen one day soon and his #46 will be removed from pinstriped circulation.  He’ll be honored for his remarkable body of work, his class, and for the way he represented the Yankees.

The game of baseball says goodbye to one of its greats.  Yankees fans will miss him and his reliability on the mound will be nearly impossible to replace.

That you can trust.