His eyes were bleary.  His voice was filled with uncertainty.  The New York Jets had just fallen to the Pittsburgh Steelers in the AFC Championship Game and Jason Taylor was addressing the media.

Taylor and his Jets teammates had the rug pulled out from under their magic carpet ride towards a Super Bowl appearance, and he was discussing the harsh reality that awaited them in the offseason.

“This team as you see it tonight will never be together again,” he said. “Whether Jason Taylor’s back, or anybody else is back, it will not be the same football team again.  It just can’t be.  It’s sad in its own right.” 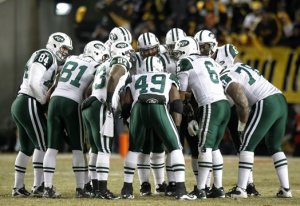 The Jets will huddle up this offseason to regroup for a 2011 Super Bowl run.

It’s sad, but that’s life in today’s National Football League.  Teams looking to maintain a certain level of success each year must contend with factors like expiring contracts, salary caps, injuries, and age – all of which play a role in shaping a roster.

The 2010 Jets were built to win now.  They acquired veterans entering the final year of their contract, and although their hand was stacked, they folded in Pittsburgh.  Now they must deal with the ramifications after pushing all their chips to the center of the table.

Tough decisions will have to be made on key free agents like Braylon Edwards, Santonio Holmes, Antonio Cromartie, Brad Smith, Shaun Ellis, and David Harris, among others.  Both kicker Nick Folk and punter Steve Weatherford are free agents too.  Gang Green will also have to reach a verdict on the futures of aging superstars Ladainian Tomlinson and the aforementioned Taylor.

The Jets were presented with an opportunity in 2010, a once-in-a-lifetime shot to play for a Lombardi trophy.  So what will it take for the Jets to get this chance again?  It starts with another draft, mini camp, and grueling training camp two-a-days.  They must endure another four-game pre-season and sixteen-game regular season.  Along the way, they have to avoid potential pitfalls like key injuries, treacherous weather conditions, and any off-the-field issues that could prevent a player from performing.

If they manage to surface with a playoff-worthy record in January 2012, they’ll have to win at least one postseason game (at most two) just to get back to the same exact position they already had on Sunday morning.

It’s possible.  After all, they’ve now done it two years in a row.  They have a young, and now experienced quarterback in Mark Sanchez, and a passionate Head Coach in Ryan. One would have to believe they are set up well in those two key areas for years to come.  As long as Ryan is leading the Jets, the mission statement won’t change either.  He expects the Jets to be chasing a Super Bowl every season, starting with 2011.

In truth though, chances like the one the Jets just had are rare.  Just ask Taylor.  It took him fourteen seasons to get to this point, and he had to join the hated rival of his former Dolphins to do so.  Taylor gave it everything he had, invested in Rex Ryan’s scheme, and believed his career would come to an end with him hoisting the Lombardi trophy in a green and white uniform.

Long-time suffering Jets fans also had dreams of green and white confetti raining from above.  It will be 43 years and counting since Joe Namath led the Jets to glory in Super Bowl III, the franchise’s only appearance on the big stage.  After all the hype, the free agent additions, Hard Knocks, Ryan’s bluster, the 11-5 record, and road playoff victories over Peyton Manning and Tom Brady, the fans believed this 2010 Jets team would be the one special enough to end the drought.

The Steelers had other ideas.  The sobering reality left Taylor, his teammates, his head coach, and all fans bleary-eyed, filled with uncertainty, and forced to accept that this team, as constituted, will never be together again.  It just can’t be.

A missed opportunity.  It’s sad, in its own right.