Rex Ryan pledged the same thing two years ago.  His quest continues Sunday in Foxboro against the Patriots in their AFC Divisional Playoff Game. 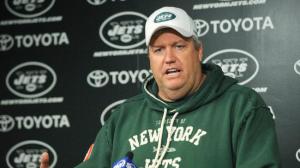 Rex Ryan Looks To Deliver a Title for the Jets

Forty-two years ago today, January 12, 1969, “Joe Willie” made good on his promise, defeating the Baltimore Colts16-7 in Super Bowl III.  Not since then have the Jets had a personality quite as colorful or brash.

Since his arrival in New York, prior to the 2009 season, Rex Ryan hasn’t been coy with his intentions.  He doesn’t just want to win a Super Bowl.  He plans on it.

During his introductory press conference, he assured Jets Nation of a pending trip to the White House following a title run.  This summer, he even hand signed an ESPN Tour Bus with an inscription of, “Soon to be Champs.” Ryan is ultra-confident and doesn’t care who he offends.

“I’m not apologizing,” he said this past August.  “I just know what’s going to happen.  My crystal ball, I’m seeing a Super Bowl trophy in there.  I could be wrong, but that’s what I see.  But every time I go to work, that’s what I look at.”

Ryan can thank Namath for the trophy he ogles over each day in Florham Park.  For forty-two years, that Lombardi Trophy has stood alone.  Ryan insists he is the green & white Messiah to add another to the collection.

He faces, perhaps, his biggest challenge this weekend.  Coming off of an embarrassing 45-3 Monday Night Football thrashing last month, Ryan knows this rematch with New England will not be easy.  However, he’ll tell anyone who will listen of his plans to pull off the upset and even out-coach the former HC of the NYJ, Bill Belichick.

His bluster might seem dumb, or even reckless on the surface, but Rex Haters must understand one thing:  he just doesn’t spew anything without purpose.

Right or wrong, and always controversial, Rex Ryan takes calculated risks with each bold statement he dangles to the media.  His intentions are almost always targeted at taking pressure off his players and coaches, and putting it squarely on his own shoulders.

It’s hard to argue with the results.  In two years, Ryan has posted an impressive 20-12 regular season record, made an appearance in the AFC Championship Game, and won a total of 3 playoff games (so far), more than any other Jets Head Coach in history.

Love him or hate him, Rex Ryan delivers.  If he can pull three more victories out of his Jets cap this year, and make good on his promise, he’ll own New York.

Just like “Joe Willie” did, forty-two years ago today.